MARRAKECH – THE PATH OF THE STORKS 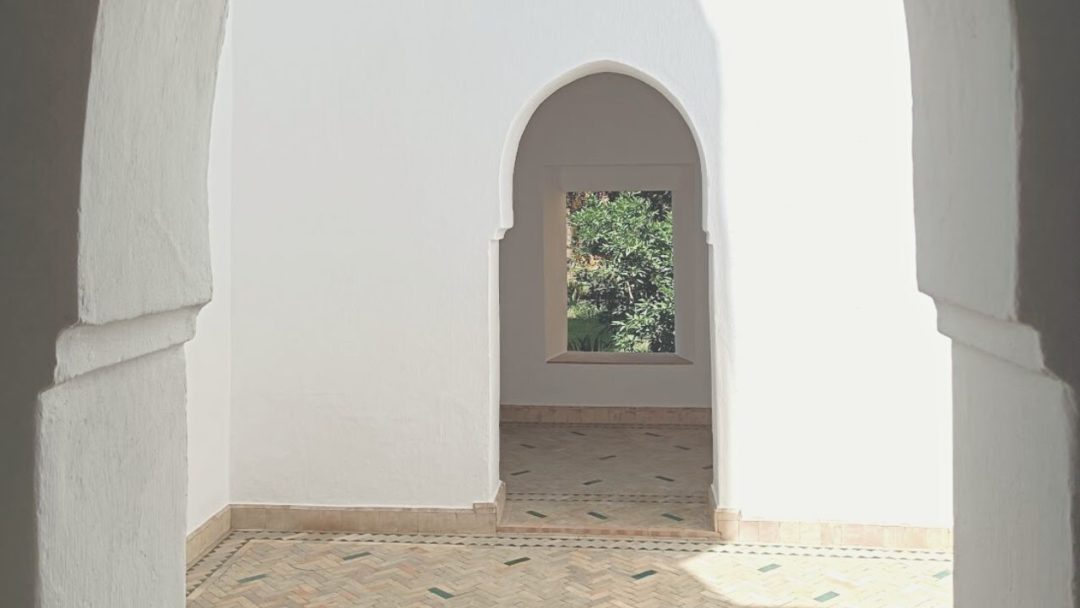 An immersion. This is the word that comes to me when I think back to those moments spent in ocher Marrakech, in the sunlight and the heat, with “The Gifted Mothers”, women and mothers of the medina, singers and traditional percussionists, heart living in the white Dar Bellarj, “House of Storks” in this city of storks.

“The Gifted Mothers” are not all moms in the literal sense of the term. As Maha Elmadi, director of Dar Bellarj, who runs this group, explained to us during our meeting : “If this one had been called ‘The Gifted Women’, we would have visualized the woman’s body first, which is not what we wished. Because it is above all the spirit, the heart of the mother, which is highlighted here in these words, and all women know this spirit !”

Straddling here over three months, from September to November, for a creative residency within the framework of our project, “Les Montagnes Bleues”, largely spent at the Maison Denise Masson, thanks to the support of the Institut Français, of which it is an annex, that at the instigation of Nada Kadiri and Adam Salah Edine of L’Moutalâte, organizer of this residency, we worked with Dar Bellarj and with his “Gifted Mothers”. This part of the project in Morocco being linked to this land of my ancestors, with which I wanted to reconnect, being able to work with these bearers of an intangible heritage was a great opportunity to try to meet at the borders and beyond, and we are grateful to Nada and Adam for having thought of creating this unexpected encounter.

But what is this presence we are talking about here ? That of the musician present to what he is playing, to what is? The presence of an immanent god ? Probably a bit of both, I imagine !

In resonance with this idea of ​​”presence”, I think back to a discussion I had with the Italo-French artist, Delphine Valli, whom I met here and who grew up in Algeria, who also came for a creation residency in Marrakech, in particular to work around the theme of “the impossible return”. While we were drinking coffee, and talking about our Arabic roots and the feelings of exile that can sometimes inhabit us, she said to me a few words that remained in my mind. Evoking the Gnawas, and making the link with Sufism, she told me that for them exile is first of all an exile of oneself, of the “SELF”, and that through their music and their dances, they returned to “the presence”, in the present, the transcendent in a way. Hearing these words was a good reminder of simplicity, and echoing my own “practice”, because as far as I’m concerned, I knew intuitively when I came here, that the best way to reconnect with my Moroccan lineage is for me by the music, since I have the feeling that an energy in my singing, comes directly from ancestors of Morocco.

Here come to me the words of “Beautiful Painted Arrow” by his Indian name, Joseph Rael, author, native of the “turtle continent”, America, who says in his book “Being and Vibration” that a real human being is someone who listens.
“Out of that capacity of inner and outer listening comes the quality of humility. The true listener is no longer defined by desires or attachments. Instead, he or she is sensitized to consciousness, (…). In that process of listening, the voice of guidance is found. This is the place where inspiration hides.”

Let’s listen here to “The Gifted Mothers” interpret in Dar Bellarj during our first meeting, a “hadra” evoking the daughter of the prophet, beautiful as the moon :

We had therefore imagined creating a joint creation, a musical piece, with “The Gifted Mothers”, based on creative work carried out during workshops in Dar Bellarj. These took place in a room, where an exhibition of photos on the theme of Moroccan women was held, produced under the supervision of the artist Leila Hida. These photos, belonging to the families of the “Moms”, resonating from the different eras of a Morocco in the process of evolution, permeated the energy of the place, bringing out in me a clear feeling of reconnection to family memories of this country, which I felt like I belonged too. Looking at the pictures, a voice inside me was whispering something like, “Hey, who’s that aunt ? and this cousin ?” Coming to connect myself to my ancestors in this country, with an underlying intention of “healing”, of reconciliation with myself, and hearing this world in resonance speak to me, it seemed to me to perceive there as the validation of this research, of this creation here.

Until the last moment, I did not know how I was going to lead these workshops, to move towards a common creation, integrating the musical tradition of the “Moms”. It was just before the beginning of the workshops that I considered a method, which later turned out to be inspiring and quite liberating.

It was about starting each of these workshops with an inner journey. We would then close our eyes, for at least 15 minutes, I would guide the path to follow with my voice. We first went to listen to ourselves, before visualizing a beneficial place, in nature. We then took the time to really feel in ourselves how the energy of this place, the water, the air, the wind, the vegetation, the silence, the song of the birds, the light, changed our inner chemistry, our state of spirit, thus impregnating us with this life which runs through everything, with this living world from which we are not separated.

Following these trips, having made us at the same time more open and more aware of the world, more sensitive to inner listening, we wrote on themes related to Mother Earth, and we improvised by singing these texts in a circle. , accompanied by guitar, violin, percussion. With the precious help of Aziz Bouyabrine, artistic director of Dar Bellarj, who accompanied and translated each workshop, we then collected the texts that we passed through a sieve, in order to find the pearls from which I would draw inspiration to create a piece to through these different workshops.

As often in this project, things take their place with an obviousness that positively disconcerts me. Thus the course of these workshops, with these inner journeys inviting us to reconnect with the living, and which were also, suddenly, some of the introductions to public restitutions. I can still feel the tranquility and openness that settled in the atmosphere at Dar Bellarj following one of these trips that I offered to the public, during the restitution in these places.

These workshops with their introductory journeys, the back and forth between inner and outer listening, moments of writing and improvisation have become a kind of humble comforting compass through these days, inviting us to balance, both in the circle of workshops and in the circle of life.

As part of these workshops, Yoko was also able to share an invitation to harmony, through an introduction to Japanese culture, and through the famous pure water lullaby “Hotaru Koi”, which the mothers learned and sang. What a surprise to find children calling out to me in the street, singing “Hotaru Koi” from memory, following the restitution at L’Moutalâte, in the popular district of M’hamid: http://lesmontagnesbleues. com/hotaru-koi/

From this work, several things have germinated, and two have imposed themselves. A song including the Darija (Moroccan Arabic), an excerpt of which you can discover here: http://lesmontagnesbleues.com/une-seule-naissance-creation-a-marrakech-extraction/

As well as a circle in which “the Moms” improvise poems they have written exalting Mother Earth :

These 45 days have passed like lightning, and there is still work to be done so that we can achieve a real joint creation with “the Moms”, integrating their tradition more deeply. The adventure for “Les Montagnes Bleues” therefore continues on these lands, with also several ideas that are taking shape and which I will have the opportunity to talk about again.

[Petite Neige] - How to transform your winter depr